Every quarter Microsoft announces who are the lucky ones to receive their Most Valuable Professional Award. An MVP award lasts a year, so for a quarter of the MVPs, October 1st is an important day.

And to celebrate that I am offering a 3 day 50 percent discount on my Formula auditing tool: RefTreeAnalyser

When Doug posted about Data Comparison Tricks, I saw Dick tell him to “pimp his site” in the comments.

Having a vivid imagination, this is what went through my head.

Anyway, that’s what I’ll now proceed to do. (Having obtained Dick’s permission first of course!)

Here’s some stuff I’ve been working on recently.

A multi-field Find and Select/Replace tool.

Although a bit old, (like me), some of the code came from this.

An alternative Status Bar that recognizes numbers even if the format is text. Woohoo!

And some games. (For the kids, but you can play too)

That’s enough pimpin’ for now. (I’m making new stuff as I write this) See you next time?

Back in the old days when Excel had menus and toolbars, a guy could use Alt+t+i to open the Addins dialog (Tools – Addins). But that would only work if there was an open workbook. No open workbook, no dialog. Now in the days of the Ribbon, the shortcut is Alt+f+t a a Alt+g (File – Options – Addins – Go). You don’t need to have a workbook open, which is nice, but there is a bit of delay between the two “a’s” in the keyboard sequence.

MS did a wonderful thing when they made the old 2003 menu navigation still work in later versions. Even though there’s no longer a Tools menu, you can still use Alt+t+i to open the dialog. Unfortunately you still need to have a workbook open for it to work. I can’t imagine why that is, but it is.

Well, it’s VBA to the rescue. You can show most any dialog with Applicaiton.Dialogs().Show. But showing the Addins dialog returns an error if there is not an active workbook, just like with the old menus. It’s trivial enough to fix, to wit:

'Dialog won’t show if there’s no workbook showing
If ActiveWorkbook Is Nothing Then
Set wb = Workbooks.Add
End If

'Close wb if it was created
On Error Resume Next
wb.Close False

That creates a new workbook if needed, then shows the dialog. It keeps track of whether it created a workbook and, if so, closes it without saving. Hardly worth your time to read this post, you say? You already knew about this, you say? Here’s the real magic. Those old 2003 commandbars still lurk behind the scenes in Excel. If you create new ones, they show up on the Add-ins tab. But you can modify the existing one too. I put this little gem in the Auto_Open macro in the same workbook as my ShowAddinDialog procedure.

And then to clean it up in Auto_Close.

On Error Resume Next
Application.CommandBars(1).Controls("Tools").Controls("I").Delete

Commandbars(1) is the menu and Controls(“Tools”) is the Tools menu. I add a new control to position 1 on that Tools menu. I don’t need a fancy caption because I can’t see it anyway. I just need a caption with I as the hotkey. Whichever letter follows the ampersand (&) is the hotkey. The built-in addins menu item has a caption of Add-&Ins... making I the hotkey for it. But mine is higher up, so it wins.

In the previous post I referenced above, I add this macro to the QAT. But the muscle memory of Alt+t+i dies hard. Rather than retrain myself like a normal person, I’m embracing my quirks. I can now use Alt+t+i and get the desired results.

For all the various add-ins available from my website, I have supported two downloadable formats, an EXE and a ZIP file. The EXE is easier to install and includes an uninstall capability. The ZIP hopefully provides the consumer greater transparency and control over what is on their computer.

In addition to the software downloadable from my website, I also develop custom solutions through my consulting work. Most of my projects are sponsored by senior executives in companies or otherwise people with substantial decision making authority. It turns out that even a Managing Director or an Executive Vice President is subject to the automated IT protocols in effect in their organization (e.g., Group Policy).

Small and midsize companies are more tolerant of the kinds of files their employees can download. So, it is my larger clients who prefer — actually, require — a solution acceptable to their respective corporate IT filters. That means no EXE and no MSI, not even inside a ZIP file.

That has been a major stumbling block in my migration to .Net. For all the advantage of the platform, providing an add-in inside a ZIP file is not one of them.

I wondered if that inability (or reluctance) to download an EXE extended to those who download software from my website. Using Google Analytics I decided to check their download preference/requirement. Would the data indicate a strong preference for EXE over ZIP or the other way around? Turns out the result is decidedly mixed! As the table below shows, with the exception of TM Plot and TM TOCCreator, the download choice is about 50-50!

The table below is a PivotTable based on Google Analytics data for my website. For each add-in the table lists the EXE and the ZIP download percentages together with a sparkline for the two formats. 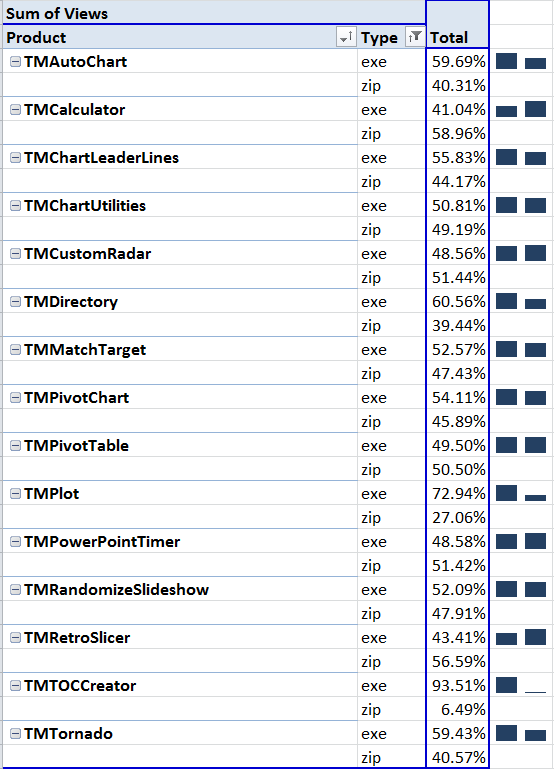 I like to share the release of this new Mac Excel add-in with you all. After many days of hard work I have upload the first Mac version of the very popular Excel for Windows Add-in “Power Utility Pak” from John Walkenbach on my site.

Power Utility Pak for the Mac, Add-in Tools for Excel 2011

As a bonus I also add my mail add-in to the collection. Please give feedback good or bad so I can make this product error-free and accurate.

Use the mail address that you find in the PUP About option in the menu if you want to report bugs or want to give feedback.