AS you know, we here at DDoE never take a vacation. Except for the day after Thanksgiving. And Christmas. And about 325 other days in the year. Thankfully, Dennis Wallentin wrote about a new tool he’s developed and allowed me to post it here.

This project started out one year ago, in November 2015. It’s been a long road and not always an easy way. The project itself has been difficult. I’ve been forced to rewrite it one time (crash) and been struggling with several “funny” issues.

Life is not always an easy ride. Health issues has from time to time prevent me from continue to develop this project as well as several other projects. A To-Do-List should, over time, decrease and not, as in my case, increase. But life can sometime be a bug that effectively prevent us from what we want to do, right?

I must explicitly thank Ron (de Bruin). Not only for being a good friend but for giving me great support with this project. The truth is that without him this project would not have been finalized. I’m amazed what Ron has done for the online community over the years, especially for those who work with MS Excel and MS Office on Apple’s desktop.

Anyway, the Code Manager is a project that I will continue to develop by adding new tools to it. Compared with other development tool the VB Editor is outdated. It’s remarkable that Microsoft still haven’t realized that VBA and the VB Editor is the first choice for the larger group of Excel power users and developers. The best Microsoft can do is to do a total makeover of the VB Editor and update it to today’s standard!

What is Code Manager?

It’s a toolbox for professional Excel/VBA-developers which will include several tools for various coding tasks.

Code Manager can run on both x86 and x64 Windows platforms. It’s a managed COM add-in that can be used for both the x86 version of MS Excel 2010 and later as well as for x64 of MS Excel.

It will always be free of charge.

Code Indentation is a versatile tool to manage all VBA code. It can operate with code in the VB Editor as well as with standalone vb-files, cls-files and txt-files.

Overview of Code Indentation
The Code Indentation tool can work with VBA-code in the VB Editor in MS Excel and in standalone files with the extension of vb, cls and txt.

When working with code in the VB Editor we can target three levels of code:

To make it simple and easy to use these commands, i.e. to indent the code, it’s available in two ways:

Select the command Code Manager > Indentation in the VB Editor’s toolbar and select the operation you want to be carried out as the following image shows:

Right-click in the VB Editor and select the command Code Manager. Next, select the operation you want to execute as the following image shows:

In order to improve the tools, I welcome any feedback and suggestions of additional tools to be included in the Code Manager toolbox.

E-mail feedback and suggestions to:

To install it, first unzip the file and then execute setup.exe by just double clicking on the exe file and follow the instructions on the screen.

The zipped file can be downloaded from Ron de Bruin’s excellent site:
http://www.rondebruin.nl/win/dennis/codemanager.htm

The following requirements must be met before using Code Manager:

The following tools have been used to develop Code Manager with:

The Code Manager is made available based on the MIT License (MIT).

Special thanks go to Ron de Bruin and Ken Puls.

Hey Daily Dosers. I had knee replacement surgery about three weeks ago and haven’t looked at Excel very much since then. I’m taking a break from my drug-induced naps and Netflix binge watching to remind you that Excel Summit South 2016 is rapidly approaching. By ‘South’, they mean

There are lots of familiar names on the presenter’s list. Go to https://excelsummitsouth.wordpress.com/ to learn more. If you’re on the Twitters, use hashtag #XLSOUTH and if you have questions, contact Charles@DecisionModels.com.

myexceloneline.com offers a free pivot table webinar when you click on the add in the sidebar. I didn’t sign up for the webinar, but I did watch a few of the free videos on that site. They’re very well made, professional videos. I really like the pace – they move along without feeling rushed.

If you have an interest in pivot table or dashboards, give myexcelonline.com a try.

Now that summer has arrived I’ve planned a summer sale. From July 1st up to July 10th I offer a 25% discount on both products I sell:
RefTreeAnalyser
and
The Excel File Remediation Utility
To get your discount, just go through the purchasing process and enter this coupon code to redeem your discount:
JKPADS-Summer2015

Regards and have a great summer!

Hi there. For the last few months I’ve been working on my main add-in, AET Excel Utilities.

Update
So far I’m in the process of setting up some partners, had a translation offer, and downloads are happening as I write this. Thanks very much to everybody for your help. Don’t be shy if you are interested!

I first started working on it in 2005, as a hobby, and a way to learn VBA. Over time it’s grown from having a handful of very simple tools, to what it is now – well over a hundred utilities (more like over two hundred), and some of them quite complex, even if I do say so myself. Useful? I like to think so. Not a day goes by that I don’t use it, and I can honestly say it saves me lots of time.

But there’s a problem. Even though I like these utilities, I’m not very good at selling myself, letting alone anything I’ve made. And in the world of Excel, most folk have either never heard of me or think I’ve retired if they have. That’s been fine until now, with me plugging away in a corner, tinkering away, but it’s always bothered me that my tools could be so much more.

So, I’d ask all of you for some help. I’m making the tools shareware. And I’m looking for people to help sell them. Do you have a site? If so, are you willing to become a partner or an affiliate? Like I say, I’m not great at sales so any assistance would be appreciated. Translations? Great! Let’s talk about a percentage. I guess the main thing is making people aware of them. Apart from making a bit of pocket money, serious interest will give me incentive to improve them and maybe even try to give my site a bit of an overhaul. (Please contact me using aengwirda [at] gmail.com if you are interested).

Here’s a few screenshots to whet your interest. (Well maybe more than a few…). Look to the left, the AET UTILITIES tab shares both my main utilities and free add-ins (which you can download here).

Here’s the download page link. On the same webpage, you can also download a copy of the Help files for more details on the individual tools, plus the password to see how the code works.

In addition to adding more tools over the next few weeks, I’ll be working on my free utilities too. More details on them, and also some new code samples, that I’m looking forward to posting about in the near future.

As some of you may know I have been working on developing Version 3 of my FastExcel product for more years than I care to remember.
First there was the VB6 blind alley, then 64-bit and multi-threaded calculation and that ribbon thing, then I detoured into learning C++ and XLLs, then there was the inevitable scope creep, (and my consulting customers kept asking me to do things, and then there was the sailing) … you get the picture.

Anyway I finally pushed the release button on June 4 2014. Yippee!!!

The initial reaction has been great (no doubt helped by the introductory offer of 50% off).

So what is FastExcel V3?

There are 3 major products in the FastExcel V3 family, targeted at different types of use scenarios. 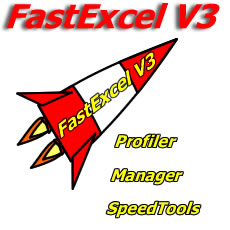 The Profiler gives you a comprehensive set of tools focussed on finding and prioritising calculation bottlenecks. If your spreadsheet takes more than a few seconds to calculate you need FastExcel profiler to find out and prioritize the reasons for the slow calculation

or Download the 15-day full-featured trial of FastExcel V3 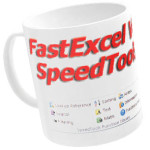 Some of you will know that I have been developing (for the past 2 or more years!) some fast multi-threaded Excel functions using the XLL C++ interface.
After climbing this rather steep learning curve I am now very close to the final release of these functions.

FastExcel SpeedTools is designed to be a state-of-the-art set of tools to help you speed up calculation of slow workbooks:

The final SpeedTools Beta test is now live and I need more Beta Testers and feedback:

So download SpeedTools Beta 3 and tell me what you think!

The best 20 Beta test feedback reports received by the end of March will get their own exclusive SpeedTools  coffee mug, (and a free license of course!).
Excel 2003 users get a toolbar to choose functions and launch the Function Wizard, and Excel 2007 and later users get 2 additional groups on the Formulas tab.

You will find more information on my website and blog, including some performance comparisons with the built-in Excel functions.

It’s almost here. Sign-up today to get the early-bird discount. Seats are limited.