At first I wasn’t going to. I live in Wellington, which is 636 km to the south. (395 miles, to those of you in the dark ages). And this being Middle Earth, to get there by road I would have had to run the gauntlet of Goblins, Orcs, and cliche tourists like Zack Barrasse likely driving on the wrong side of the road as he heads to Hobbiton behind a grin bigger than one face could safely hold:

Here’s a picture of me imagining I’m speeding around a corner only to find Zack heading the other way:

And then even if I manage to avoid Zack, there’s no avoiding the famous Auckland traffic. I still haven’t gotten over how bad it was last time I was up there: 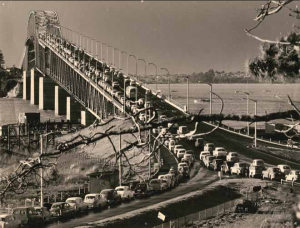 (Don’t get me wrong…the traffic south of Auckland is not without its own challenges):

And then there’s the whole “Paying for Excel feels a little like the concept of paying for sex…I’m good enough at it these days that I really shouldn’t have to” thing. (Excel, that is.)

But then I read the program. And there is truly something for everyone. Even me, who’s a virtual demigod at it compared to the poor suckers around me who don’t use it at all and have no desire to start now. Not to mention the outstanding cast. These guys and gals are like the Dirty Dozen:

Or at least, they would be, if there were one more of them. Oh wait, look: there’s two more of them below. Okay, so they’re like the Dirty Baker’s Dozen, then.

Those two extras are a couple of guys called Yigel Edery and Ben Rampson from the Excel Project Team. These guys think they’re here to discuss the future of Excel. But I still live in the past – along with 99% of the rest of us – so I’ll make sure they find some time to answer all my tricky questions, like “How ’bout refreshing the Conditional Formatting Dialog. Have you ever had to actually use it yourselves? Huh? Huh?” …and… Where the hell are my Dynamic PivotTable References already? We’ve got ’em for Tables, but not for PivotTables. Have you ever tried to integrate PivotTables into a formula-driven spreadsheet? Huh? Huh? …and… Why does every ‘new’ Excel feature have the prefix ‘Formally Known As’? Have you ever tried to write a book about characters that kept changing their names half-way through? Huh? Huh?

Boy do I feel sorry for those guys: They’ll be dead keen to talk about the new extensions, while I’ll be dead keen to point out that the stairs that lead to them still are a little unsafe to use.  Let’s hope they’re still smiling like that when they get back on the plane.

I’ll also get to meet this guy, Ken Puls,

…who wrote the most useful Excel blogpost ever in the history of most useful blogposts ever on the strength of it’s excellent existential first line alone: Do you know why you are here? He’s moving on to something more future focused in his presentation: Do you know where you are going? (A little place called PowerQuery apparently, located in the hip new suburb of Get and Transform.) Can’t wait, because I know zipcode about it.

And following straight on from that, I’ll either get to meet the Myth-Buster shown left, or the Chart-Buster shown right. (Apparently speakers are provisional and may change.) At least one of those guys needs no introduction: He’s Jon Peltier, and he’s a regular addition to my Google Search Terms whenever I try to squeeze out a good chart.  And I owe him an entire beer of gratitude thanks to the best macro I never paid for. He’s going to pick up where Ken left off: Using Ken’s Powerquery data to build a Dashboard.

I also finally get to meet Bill Jelen. I’m gonna ask him nicely to autograph my stack of Excel books…even the ones he didn’t write. (He didn’t write like 0.01% of them, so it won’t take him long).

The only problem is that Bill’s talk coincides with another from Ken on PowerQuery. Damn. But maybe I’ll just have to skip Ken’s sequel, because Bill’s gonna dive deep into Data Visualisations (yes, it’s spelt with an s down here), Conditional Formatting, and PivotTables.

And of course, Zack isn’t here merely to look down Hobbits’ holes. He’s also here to talk about Tables, and perhaps to drink me under one afterwards.

And I’m super-excited to be meeting Charles Williams, who’s like the Phar Lap of Fast Excel. The Edmund Hillary of Excel’s capillaries. The Ernest Rutherford of Excel under-the-hood. If you’ve got spreadsheets that take about as long to open as the running time of your average installment of The Hobbit, then you need to read this, and then you need to come meet this guy.

And that’s just a select few of the wizened, Excel-scarred faces that I’ll see there. There’s a whole bunch of other international stars and local heroes coming too (including from that sleepy continent-sized Island that lies to the West of New Zealand) that I just can’t wait to INDEX and MATCH.

So yes, I’ve got my ticket. And I suggest you get yours pronto, because – as we say down here – it’s going to be O for Owesome.

You going? Give me a shout out in the comments, and we’ll CONCATENATE. You thinking of going, but haven’t quite committed? Shout out below anyway, and perhaps one of the Dirty Baker’s Dozen will drop by and talk you around.

20 thoughts on “Why I’m going to Excel Summit South. (And why you should too).”