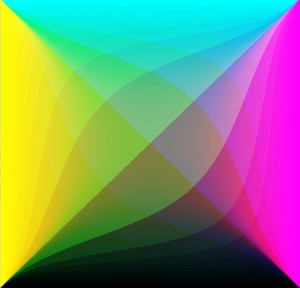 When you go to replenish your ink cartridges, you don’t come home with a Red/Green/Blue gizmo. You come home with a Cyan/Magenta/Yellow/Black multi-pack whose cost is about the same as your printer. (It’s the razor and blades business model.) Your computer (input device) works in RGB; your printer (output device) works in CMYK. The RGB color vectors are zero to 255, the CMYK vectors are zero to 100. But it’s not that simple (more on this at the end). It’s like converting Fahrenheit to Celsius and only being able to use integer degrees. The -40° equivalent commonality point for colors is zero. The image is a representation of the CMYK color space.

The flip function CMYK2XL() is this: 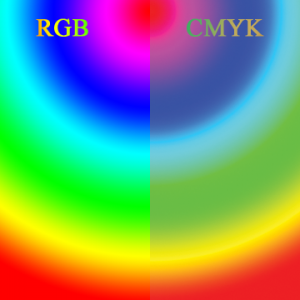 Close enough for now. I can’t see a difference, but these eyes have some miles on them, and are behind plastic to boot. But there are differences. Wikimedia Commons gets almost the last word.

A comparison of RGB and CMYK color spaces. … If you were to print the image on a CMYK device (an offset press or maybe even a ink jet printer) the two sides would likely look much more similar, since the combination of cyan, yellow, magenta and black cannot reproduce the range (gamut) of color that a computer monitor displays. This is a constant issue for those who work in print production. Clients produce bright and colorful images on their computers and are disappointed to see them look muted in print. (An exception is photo processing. In photo processing, like snapshots or 8×10 glossies, most of the RGB gamut is reproduced.)

The code above is a device-independent solution to a device-dependent problem. Your printer will vary. But passing your work through it and back will give you an idea of what the printed product will look like, before it’s printed.