It’s fun to argue about whether VLOOKUP or INDEX/MATCH is better, but to me that’s missing the point: they are both bad.

So I decided to design and build some better ones.

The syntax is designed to make it easy to convert a VLOOKUP to MEMLOOKUP, but there are differences!

So you want more flexibility? Try the AVLOOKUP/AMATCH family of functions

It’s always tempting to cram in more function (scope creep is universal), but if the result is too many parameters then it’s a mistake. So instead there is a whole family of these lookup functions that build on the MEMLOOKUP/MEMMATCH technology to provide the ultimate in flexibility and power whilst remaining efficient. 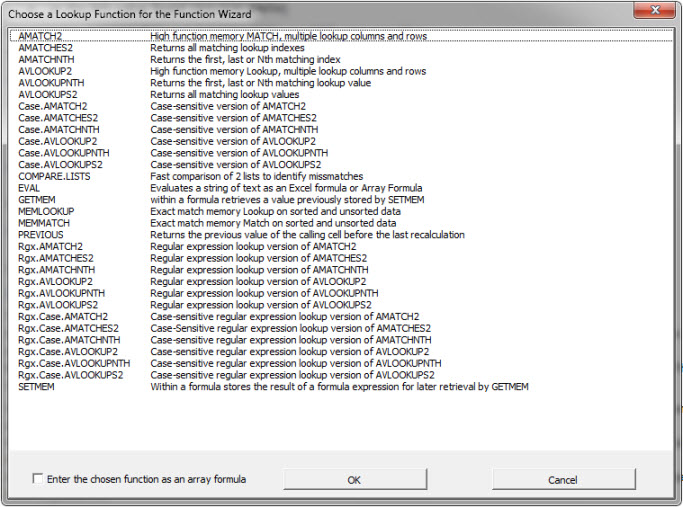 Try them out for yourself

These functions are included in the 90 or so additional Excel functions built into FastExcel V3.
You can download the trial version from here.

If you like them then ask Microsoft to add them to the next version of Excel!

I would be delighted to tell the Excel team how I built these functions and the algorithms they use.

By the way they are written as C++ multi-threaded functions in an XLL addin for maximum performance.

To round out the Lunch Pairings series, I want to write about some of the design decisions and performance measurements.

I’m not totally happy with the end result. This always happens when I have combinations and constraints. Combinations are fine. Constraints are fine. But combinations that must be constrained always make me loop more than I like. It just seems like there should be a better way. Maybe someday I’ll be smart enough to figure it out.

I started with a collection of contacts and I removed a contact from the collection when I added it to a lunch. I like this method of avoiding duplicates – make a list and remove the selected item from the list. The problem with this method is that it only serves one of my constraints – no lunch per contact per month. It doesn’t consider duplicates over two or ten months.

I’m still not supremely confident that the current method will procedure good results, particularly as the history of lunches grows. Time will tell, I guess.

My first iteration with the final design took 282 seconds to run. I never optimize code for speed until the end. Make it work, make it pretty, make it fast. In that order. Well, it was time to optimize and 282 seconds was not an acceptable run time.

Well it’s pretty obvious where to start. My AttendeeList property returned a delimited string of sorted contact names. Calling that 3.5 million times was costly, to say the least. Once a lunch was create, its contacts did not change. There was no need for me to keep calculating that property every time. I made the property a write-once, read-many property.

Public Property Get AttendeeList() As String

The first thing the property does is check for the existence of msAttendeeList, the module level variable. If it’s there, it simply returns it. If it’s not there, then it hasn’t been calculated yet. The string is created and stored so future calls don’t have to calculate. This got my run time down to 60 seconds.

The next lowest hanging fruit was checking to see if there are any matches. Here’s what that property looks like now – I cleaned it up for the previous posts.

Public Property Get AttendeeMatch(clsLunch As CLunch, lMatchMax As Long) As Boolean

I used the Split function on both lunch’s attendee lists and roll through the array looking for matches. First, I tried to use Instr instead of split (that’s the lower commented out area).

Nope, that’s worse. Next I try going to a For Each loop (the upper commented area).

Oh, that’s way worse. Back to my original Split way and my 60 second run time. Then I figured it out. Sometimes, often times, I get so hung up on the Total column that ignore the Count column. Once I worked on lowering the count, everything got a lot faster. How to lower the count of the match calls? Find matches sooner rather than later. Instead of For Each looping through the lunches, I looped through in reverse. I was far more likely to have a match on a lunch from the current month because the constraints are tighter. So by checking the most current lunches first, I reduce the overall number of calls. Here’s the IsRepeat property that loops through the lunches backward.

Public Property Get IsRepeat() As Boolean

If clsLunch.IsWithin(Me.LunchDate, 10) Then
If clsLunch.AttendeeMatch(Me, 3) Then
bReturn = True
Exit For
End If
End If
Next i

That got me down to a manageable 13 seconds. That I can live with.

I need to get the code to PerfMon because there are two things I don’t like about it. First, it doesn’t respect my indented Exit Sub lines. Second, I would rather if it kept a history of output (append rather than output to a text file) and allowed me to comment on them. I’ve done that here by copying the results to the right and writing a comment before re-importing the sheet.