Thought I’d share my two favorite pranks with you.

Number one: Take a screenshot of an MVP from their own website, subtly change it somehow, then email it back to them saying “Did you really say this, or was your site hacked”.

Here’s an example. Spot the original. 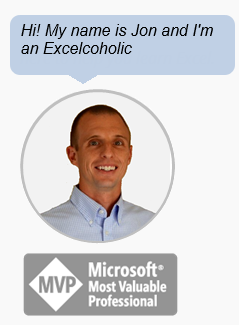 Number two: Take a screenshot of someone’s spreadsheet next time they walk away from their desk, then paste it neatly over the real thing – like this one that I’m in the process of doing:

Hopefully you’ll catch them before they quit Excel forcibly using End Task. (But don’t worry if you don’t…they’ll be none the wiser.)

My only problem is that I’m forced to play this last prank on myself, which kinda ruins the surprise. But I’ve still got that first one to get me through.

Any new Excel-related April Fools pranks out there from anyone? I still have a chapter to write of my Evil Genius book on arrays or something unimportant like that, but I’m running out of steam. So I’ll just put your nastiest pranks in there instead. That outta help folk out with career progression, one way or the other…