Last month I read an article about a job interviewer who played TicTacToe with his applicants. It was like an instant shared round of golf, and the interviewer put great store in the correlation of good hires with good players. So in case any DDoE readers might run into that guy, here is TicTacToe (or Noughts and Crosses as it’s known across the pond) in a user form suitable for practice. 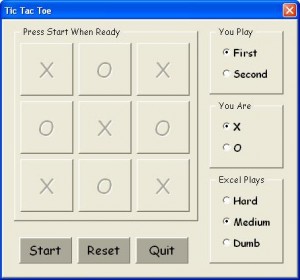 There are several XL versions out there in the wide world of web (though not too many in a user form) and this is just the latest. It’s a refresh of my first XL code that wasn’t a tutorial, written in XLM too many moons ago. 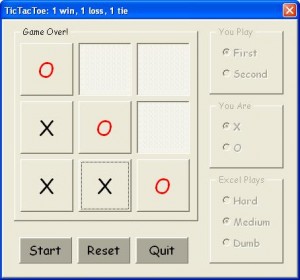 Start refreshes the game, and Reset takes you back to where you can adjust the mode of play. It looks different, but it works fine on a Mac with XL 2011. Its default is the Comic Sans MS font. If you’re playing second, you can control the start square for XL by clicking Start until XL randomly picks the square you want it to use.

The form is available here. After importing, it needs just a one-line macro to run.

Presumably, that guy giving the interview plays TicTacToe well, so you won’t win. I don’t think you want to lose, either. Or maybe just lose one out of three. I think I read about it on the BBC’s iPad service. If you remember where it was, please comment. And if you beat it with XL playing hard, please say how. Your game is captured in the VBE’s Immediate Window.

Provided as a public service to Dick’s readers. :roll:

14 thoughts on “Noughts and Crosses”